Penny was born in Yorkshire and moved to the south to train as a radiographer. She worked in a busy London teaching hospital for a couple of years before sensing a call to full time Christian ministry. After spending 4 years with Youth With A Mission, she returned to London and worked for a Baptist church as evangelist and church planter. During this time, she began studies at London School of Theology (then LBC).

During her final year at Bible College, Penny embarked on a research project which considered the church planting potential of the Thames Gateway, and explored the significant role that a church could play in the development of a new community.

After ordination as a Baptist Minister in 1998, she moved into London’s Docklands to engage in pioneering church planting. The vision planted during her first visit to Docklands, fed by the research project and subsequent visits, resulted in 9 years working in the Royal Docks.
In April 2008, she moved to Gravesend to explore pioneer church planting in the new housing in Kent Thameside on behalf of the association.

Penny is married to Barry, a GP working in south London and they have 2 grown up children. Penny enjoys coffee with friends, running (recently completing a half marathon), being creative, and films with happy endings! 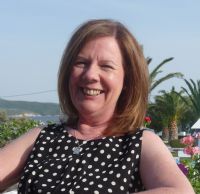