During the October half term SEBA runs a mission week, information & booking forms are released early in the year

Do you want to do something worth while?
Do you want to make a difference, share your faith, help with a mission, grow in your Christian life, learn new skills, return to your church a changed person?
Then joining a ‘MAD’ team is for you.

MAD stands for Make a Difference!
MAD is the SEBA mission that takes place to help, support, encourage and enable the local church. It is not to be seen as a stand alone event
but as an integral part of what your church is doing. It may be that the influx of a group of people will be just what is needed to enhance your
current program, kick start a new initiative or help you to do something that is not possible with your current congregation & the extra help of a group will make all the difference.

MAD in 2017 was in Godalming and the projects we did this year were high visibility, with a town centre church it seemed a good idea to get the church as visible as possible. 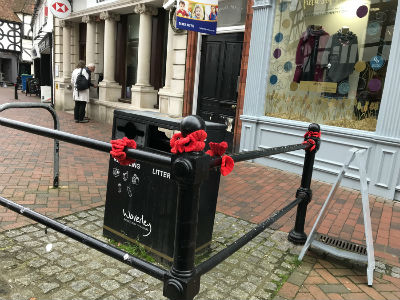 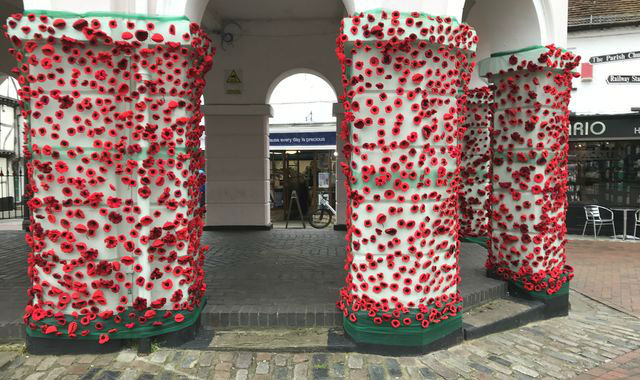 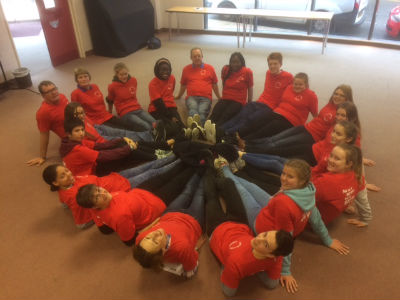 So with thousands of crotched poppies across the high street in a late night yarn bomb to a giant tissue paper stain glass window across the front of the church, it could hardly have gone unnoticed that the church were out and about over the 2017 October half term week. 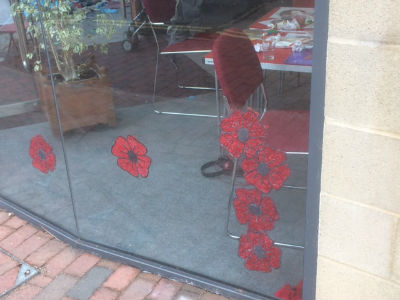 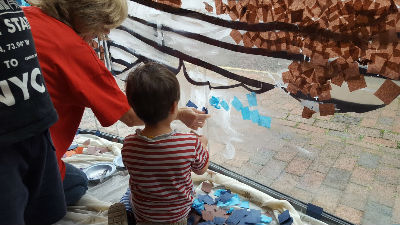 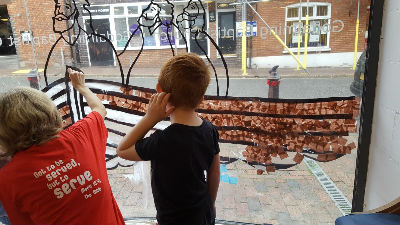 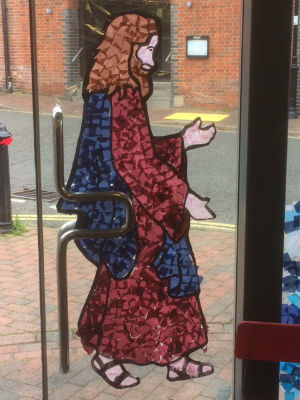 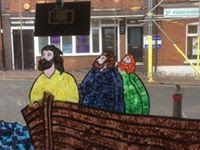 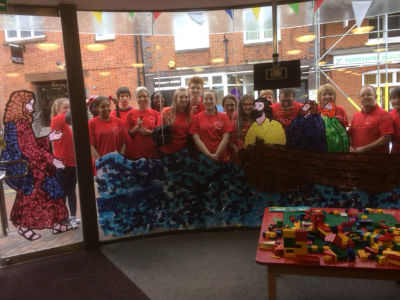 There were also hundreds of plants given away to shops and residents, ‘bags for one’ given to shoppers, rubbish collected across the town and a variety of fun things happening in the church that brought outsiders in to engage with exhibitions, cake competitions and as is always popular enjoy the bouncy castle. This year it is also possible that the now famous red T-shirts may be seen on the popular TV show Top Gear, who just happened to be filming as we were taking our plants from shop to shop. I think that Godalming are aware that the church is there and that the love of God has touched many lives during the week.

The MAD mission was in Aldershot this year. We had the largest team ever with as many as 30 there for some of the days. The week was full of projects such as delivering plant to the local households, running a Quiz night, a Holiday club and a Youth night. Teams went out into the town to give a bag of goodies to local people one of the young people on team wrote ‘My favourite event was the ‘bag for one’, where we prayed for God to identify a person for us to give a gift too. MAD really showed me how God can work, even through your imagination and that we can all do it – you don’t have to be anyone special, you can just be a normal person.’ 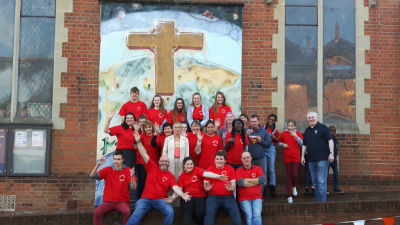 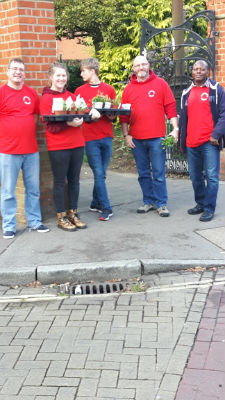 The church floor was taken over by a piece of giant art, this was a fantastic attraction for people from the neighbourhood, 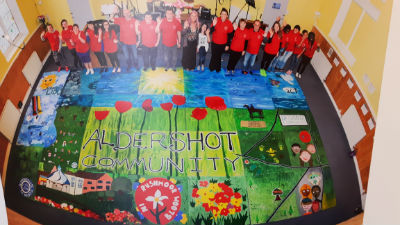 as was the great Aldershot bake off, the Mayor was very impressed with both the art and the baking. The other judge was a lady from the WI who thought the standard of baking was delicious, either that or she was being very polite! 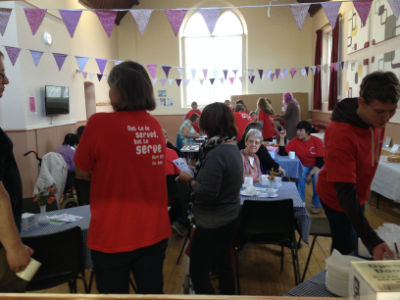 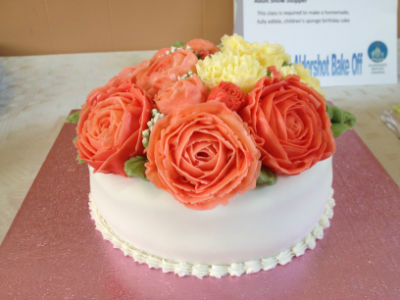 Alongside this there was an opportunity to help clean up the local park, it was a very busy week. 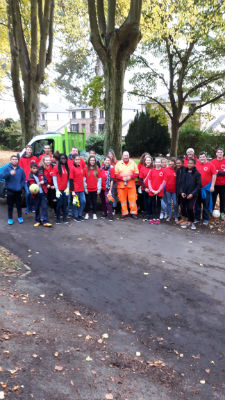 Aldershot Baptist turned out in force, connecting with enthusiasm with each of the projects. It was especially encouraging to have time to worship together one evening, thanking God for all the contacts made and the favour that it created. All in all, a very successful week.

Well done to a brilliant MAD team and a very well prepared and hardworking church team. I am hopeful that the 2017 MAD will build on this year’s mission and that we will see a good number of  people getting involved again when we head off to Godalming.

Making a real difference with random acts of kindness

People of all ages joined forces in a bid to really make a difference in Edenbridge by performing random acts of kindness. 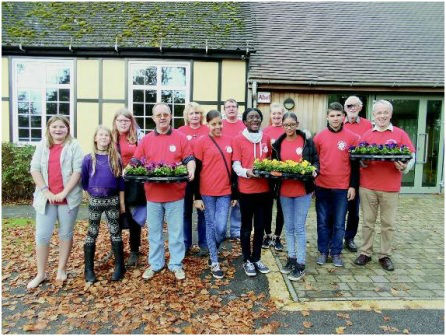 Youth worker Anthony Shipwright, who planned and organised the event locally, explained that a team of 10 had come from outside the area including one member from France.

They were joined by 20 people from local churches including St Lawrence’s, the Eden Church, St John’s in Marsh Green, Holy Trinity in Crockham Hill and Edenbridge’s Parish Church of St Peter and St Paul. 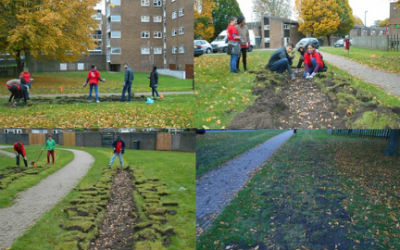 During the week they picked up 20 sacks of rubbish in Marsh Green, ran holiday clubs in Crockham Hill and at the Eden Centre attended by around 95 youngsters aged up to 12 years, delivered 800 pansies door to door including on the Spitals Cross and Stangrove estates, and planted 2,000 daffodils along the pathway near the playground at Spitals Cross.

Sevenoaks District Council funded the bulb planting at Spitals Cross and also supplied high visibility jackets and litter picking equipment for the litter pick, while Edenbridge Town Council helped by identifying projects that could be done during the week.

Mad, great to have Chris Duffett with us, & a great time was had getting involved in a load of different & challenging projects across the town of Folkestone 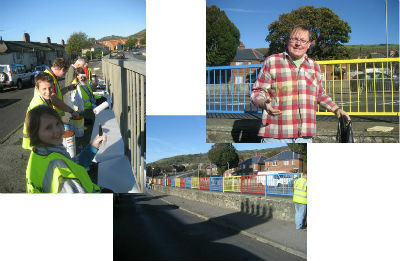 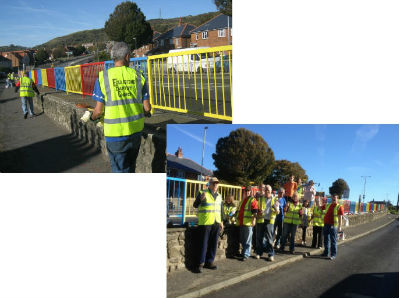 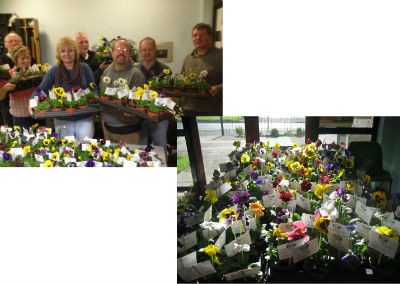 unfortunately, due to the pandemic, this year's MAD has had to be cancelled.